The two pieces below are a tribute to someone I met a very long time ago, in the 1980’s, and have encountered her repeatedly over the years on the streets and in the squares of Cambridge. She has been someone that impressed me and someone I have always admired, and was a joy to run into. She is gone from Cambridge now, and she is gone from this place, in some ways. And yet, I know she is still here. How do I know that? I can feel her presence even today. She has left a lasting impression. Andrew M. Prokopis 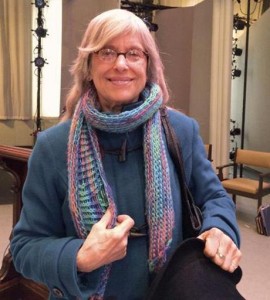 Friends say Marcia Deihl was always the first person to think up a witty song that perfectly captured the moment, and to encourage the same lyrical invention in others with her “Bizarre Song Parties,” where the price of admission was a ditty of one’s own.

Deihl was a Cambridge activist who spent her life fighting — and singing — for what she believed in, and who had embarked upon retirement with joy that she could finally dedicate all her time to her art.

And she loved to ride her bicycle, a clunky old three-speed decorated with paper flowers and streamers. With her long hair streaming behind her, she cut a distinctive figure, one familiar to many Cambridge residents.

On Thursday, friends mourned the untimely death of the 65-year-old, who was killed Wednesday after being hit by a dump truck while riding her bike on Putnam Avenue.

“She was an icon of Cambridge life. She was a very colorful figure, beloved by the people who knew her,” said Pam Chamberlain, a longtime friend who described Deihl as “a riot” with a keen sense of irony and a gift for bonding with people. “It’s a great loss for the folk community and the feminist movement.”

“That line is about speaking out, and not being afraid, and using your voice, and that’s what we were doing,” Silverstein said. “We were breaking out, and breaking away, and breaking rules, and shocking and disappointing our parents, and we were not afraid. We wanted to be heard.”

Deihl’s brother, David, said his sister had always loved music. In high school, she played the French horn, and she worked for Rounder Records in its early days before going to work at Harvard as an administrative assistant.

In the summer, he said, she would play the fiddle for the crowds at Faneuil Hall, more for the fun than the quarters tossed her way.

“She just enjoyed it,” he said.

David Deihl said his sister was a leftist at home in Cambridge’s progressive tradition.

“She and Cambridge were a perfect match,” he said with a chuckle.

Marcia Deihl’s originality, and her willingness to be “her whole self everywhere she went,” resonated deeply with the people she worked with in the activist community, said Abe Rybeck, founder and executive artistic director at the Theater Offensive, a lesbian, gay, bisexual, and transgender theater company, where Deihl was a volunteer and donor.

“She didn’t hide a part of herself from anyone,” said Rybeck, who said he treasured the natural beauty of what he called her “outness” in advocating for the bisexual community.

Deihl was brilliantly funny about her own life, and celebrating who she was, those who loved her recalled. In one song she wrote called “I’m Settled,” she sang about what she said was a true story: watching her brother get gifts celebrating his marriage, and sending out her own fake engraved invitations proclaiming herself “Settled.”

“No hubby no house no car no kid, no regrets for what I didn’t or I did,” she sang.

Message to My Younger Self: It Turned Out Just Fine

Marcia Deihl, in an undated photo, while on a visit to Mass MOCA. The beloved Cognoscenti contributor was struck and killed while riding her bicycle in Cambridge, Mass., on Wednesday, March 11, 2015.

A note from the editors: We were deeply saddened to learn of Marcia Deihl’s untimely death in Cambridge on March 11, 2015.

Marcia was a beloved contributor whose first submission, a moving homage to her 102-year-old mother, made a deep impression. So did Marcia, whose wit, good humor, grace and sparkle characterized our many emailed editing exchanges. When she came to WBUR to record her essay as a commentary, we discovered that these qualities fairly radiated off her in person. Marcia had charisma and humility to spare. It was a beguiling combination.

That Marcia’s life was cut short on a day when Mother Nature granted her first reprieve in many long months of punishing weather seems especially tragic; the cold had shattered the back window of Marcia’s car – we know because, finding humor in everything, Marcia had emailed us a photo of it. An inveterate bicycle rider who once shared her thoughts about bike lanes with The Boston Globe – “This lane’s a bike lane, this lane is MY lane…” – we were not surprised that Marcia was back out on two wheels yesterday, enticed, no doubt, by the day’s hint of spring.

What follows is Marcia’s most recent submission, “Job Title,” a characteristically thoughtful and honest taking stock of her 65 years. How lucky she was to have arrived at such peace of mind, and how unlucky for us all that she is no longer here to share it.

We express our deepest condolences to Marcia’s friends and family. We are glad to have known her and to have shared her writing with our readers.

One of my favorite walks in Cambridge is the Magazine Street Beach nature path near the Boston University Bridge. Thickets of wildflowers, shrubs and grasses line the Charles River. Soccer players, dog walkers and the hookah-and-earbud crowd share the grass with red winged blackbirds and tiny bunnies. But the sight that most draws my eye is that yellow stone industrial-looking building across the river. There I am, in 1967, gazing out the window of my freshman year biology lab.

I was a student in the Division of General Education, a two-year liberal arts program located on the third floor of 855 Commonwealth Ave., which also housed the School of Fine Arts. I distinctly remember looking up from the formaldehyde stench of my poor dead frog, gazing out over the river, and wondering how my life would turn out.

“What will I be?” I had written in a high school poem called “My Future Life.”

I’ve had but a small taste
Of Mother Art
Of creativity and Music & Poetry
And this taste made me hunger for more.
Will a steady diet be too much
Happiness for me to take?
. . . I feel so old
And my life has just begun.

Oh the drama! Why did I fear a steady diet of happiness? What was I going to do — explode? That’s what it felt like; even at 17, my high school dreams had been deferred long enough. I had both the highest IQ and the highest weight in my 70-person class, and I was a magnet for bullies. I’d show them! I’d become a famous artist!

I had both the highest IQ and the highest weight in my 70-person class, and I was a magnet for bullies. I’d show them! I’d become a famous artist! So what happened?

Turns out I spent more time in that building than I could have predicted. Two more years as a music major, and the two years after that as a secretary in that same biology department.

How did this happen? Oh, a combination of a radical conversion, my subsequent boycott of anything to do with the “elitist” academic world, and an eating disorder. Working as a secretary felt safe. I played a role — like Lily Tomlin wearing a fake “Waitress of the Week” name badge when she actually worked as a waitress. I showed up in offices throughout my 20s. The job labels changed — temp typist, secretary, office assistant, administrative assistant. I’m convinced that that last one is like “Associate” at Walmart — a title that pretends to confer status in lieu of higher wages.

Even though I was an activist and a musician on the side, I still dreaded that “Occupation” line on financial forms. I had to write “Secretary.” No delusions for me. I felt I had no right to call myself a musician unless I was famous, or, at the very least, self-supporting with my music.

At 33, I got a full time job as a “Staff Assistant” — best-sounding term yet — at a Harvard University library. I figured I’d stay a few years, take some almost free writing courses, and keep playing folk music. Maybe my big break could still come. But when the census form came, there it was: “Occupation.” I wrote, “Library Office Assistant.” Thud. Twenty-five years went by.

But it wasn’t that bad. Nothing like getting older to loosen up those binaries. In my 40s, I realized that there was nothing wrong with being a secretary — it’s a relatively stress-free job helping others. Most secretaries also had outside work that they loved. By 50, it was obvious that fame itself was a side benefit, not a goal. Some of my professional musician friends thought I had done the smart thing, because they barely made a living and had no savings. And even “famous” artists had sometimes found that there were more important things than producing art. Depression and addiction could eat up your work as you aged.

Then two events coincided: I approached 60, and the stock market bit the dust. In 2012, I was offered a buyout — a year’s salary — to quit early. I looked back and forth like a cartoon ping pong match from my expense sheet to the pension they were offering me. What? Could it be? Yes!

I could do it. I could write and make music and support myself. So I was an artist. I was the turtle who won the race in the end! But when I looked around, no one was racing with me, toward status or life itself. The “them” that I wanted to show had probably been through as many reversals as I had.

I already had a useful and happy life. But now I was free from the lash of making a living, and I could write and sing to my heart’s content. Euphoria! At least in theory. In practice, I stepped into a sharp learning curve. How many of those precious hours should I spend at my writing and music? What kind of boss was I — mean, slack or firm but kind? Where could I find support?

When I come to the cattails at the end of my river path, I circle back and look up again at that little window.

“So how did it all turn out?” she asks impatiently. Should I tell her that fame is a teenager’s dream, that success as a person comes before success as an artist, and that, all along, she had been her only judge? Nah. She would have to learn it all in the field, as I did.

I give her a wink. “It turned out just fine.” 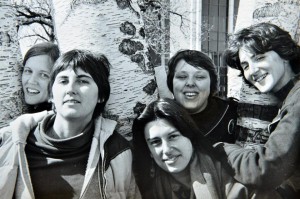 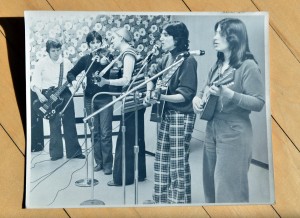 Thank You Marcia! For Being Here For As Long As You Were!